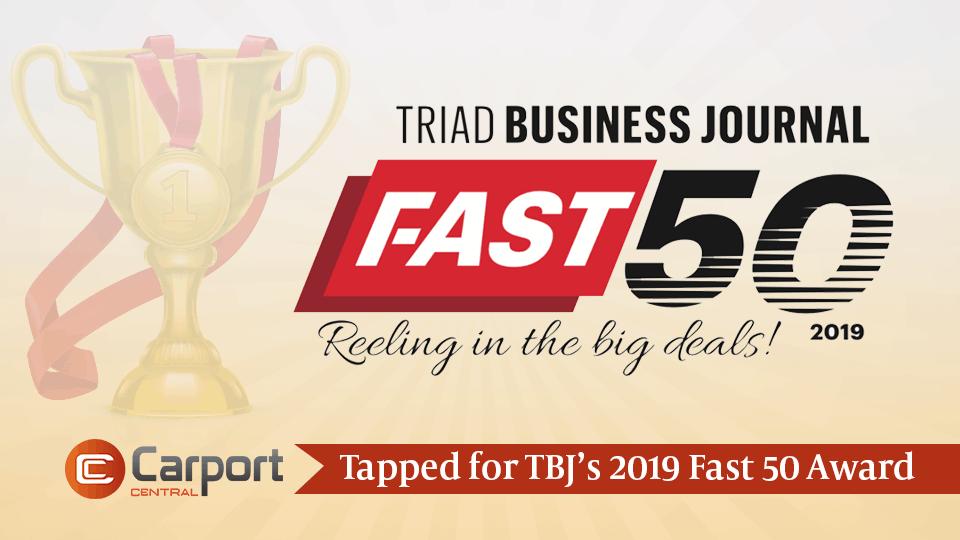 We’re pleased to share the recent announcement from the Triad Business Journal (TBJ) that Carport Central is on its 2019 list of the 50 fastest-growing companies in the NC Piedmont Triad!

When brothers Albert and Jay Lara founded Carport Central back in 2014, they didn’t set out to win awards. They really just wanted to help people by creating a new way to do business in the metal buildings industry. Their vision for Carport Central revolved around a commitment to innovate, provide exceptional service, and treat all of its customers, employees, and business partners fairly. It’s a business model that’s really worked well – over the span of five short years, Carport Central has grown to serve 48 states, and is now one of the largest online providers of metal structures in America!

To be eligible for Fast 50 consideration, a business must:

Smith Leonard PLLC, an independent accounting firm based in High Point, NC, verifies and ranks each nominated company using a formula that considers both dollar and percentage growth. According to the Triad Business Journal, each of the Fast 50 winners is a company that obviously has the recipe for success figured out, and each is making an important contribution towards keeping the Triad economy strong. TBJ has been tracking the Triad’s 50 fastest-growing companies each year since 1998.

The Triad Business Journal will be counting down the 2019 winners – all the way from #50 up to the #1 fastest-growing company in the Triad – at its 21st annual Fast 50 Awards Ceremony, which will be held at the Congdon School of Health Sciences at High Point University on Thursday, September 26. Carport Central plans to be well-represented by sending a number of its team members, and is really looking forward to being a part of this special event.

TBJ’s Fast 50 announcement comes on the heels of Carport Central having just received another prestigious accolade in recent weeks – the BBB 2019 Torch Award for Ethics. The Torch Award is the highest honor that the Better Business Bureau can present to a business. Being a recipient indicates the business not only believes in the high standards of honesty, integrity and transparency promoted by BBB, but also consistently acts on them and continuously integrates them into its daily practices. Carport Central is the first Triad-area business in the metal buildings industry to earn this special distinction.

Carport Central is humbled to have been recognized for both of these prestigious awards, but they weren’t won by any single individual. Rather, they are a testament to the special group of people that make up the Carport Central team – its owners, managers, building specialists, and support staff, not to mention having the best digital marketing partner around in Cibirix. An organization is only as great as its people, and at Carport Central, team members aren’t just seen as coworkers; they’re seen as family.

If you’re in the market for a metal structure, the Carport Central family would be honored to help your family get exactly what you need. You can reach out to us online anytime here, or just pick up the phone and give us a call at (980) 321-9898 today!