Garages: From Humble Beginnings to Birthplaces of Innovation 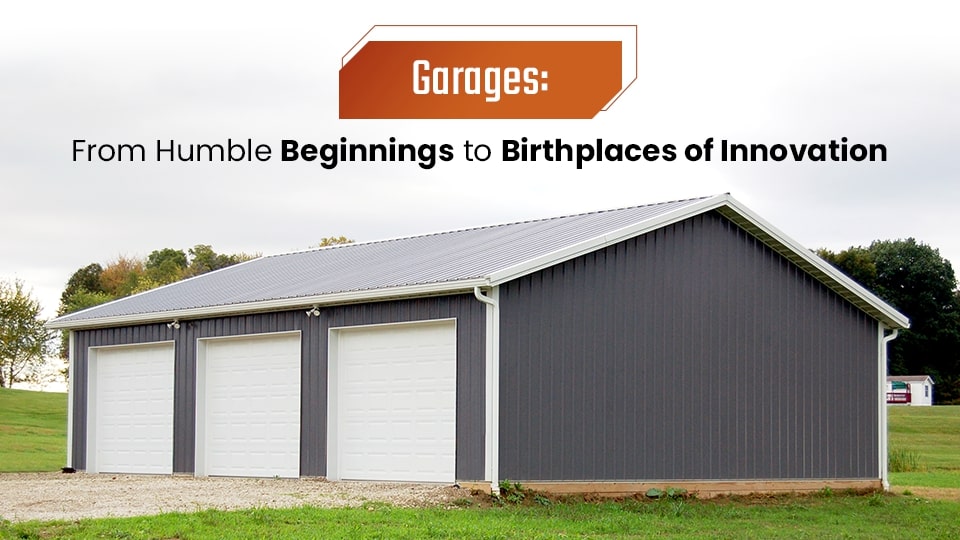 The Spark of Innovation

As human beings, we often have a habit of looking at the world around us with the same old eyes, and just remaining content with the familiarity of what is. But sometimes, an individual takes a mental step beyond merely accepting what already exists, to dream about what might be. It’s in those moments that the sparks of innovation are truly born!

Take the modern garage, for example. We didn’t go from having no garages at all, to having buildings constructed through complex engineering of sophisticated materials overnight. It was a process that developed in stages over time. The idea of having a self-contained storage facility has been around for thousands of years. There’s evidence of ancient Native Americans – the Anasazi, which predated the Pueblo Indians – living in caves. They apparently also used smaller caves or alcoves just for storage purposes. Ancient Egyptians dug underground bunkers for storing grain, and ancient Europeans used the skeletons and skin of wooly mammoths to construct their own outdoor sheds.

The Development of the Modern Garage

With the advent of the 20th century came the development of the automobile. It wasn’t long before car owners realized they needed someplace to store their vehicles where they’d be protected from the elements. At first, communal carriage houses which had originally been used to house horses and wagons were repurposed and rented out for storing cars. These early “parking garages” addressed the need for a while, but eventually automobile owners started to seek out storage options that were more easily accessible and convenient. Homeowners began to construct shelters on their own property for storing their individual cars, and thus was born the notion of having your own private garage. Initially, these buildings were little more than sheds with barn doors. It wasn’t long before garages began to be incorporated into new home designs. Standalone garages also continued to develop and grow in popularity, and that trend has continued right into the 21st century.

Some BIG Ideas Have Been Born in Garages!

Over the past hundred years or so, some really big innovations were birthed in humble garages. Here’s just a short list of inventions and businesses that were actually developed in garages, barns, and outbuildings:

William S. Harley and Arthur Davidson constructed their first prototype for a motorized bicycle in a cramped wooden shed in Milwaukee, WI. By 1903, they had officially launched themselves into the motorcycle market.

What is now the biggest media conglomerate in the world was started by brothers Walt and Roy Disney in a one-car garage belonging to their uncle, Robert. Their new studio company outgrew their first location within a matter of just a few months!

Bill Hewlett and Dave Packard built their first product – an audio oscillator – in a 12’x18’ garage behind the house they were renting. One of their first customers? Walt Disney Productions!

Harold Mattson and Ruth & Elliot Handler started out making picture frames out of a Southern California garage. From the scraps of frames they started making dollhouse furniture, which became wildly popular. They moved their focus just to making toys, and eventually became the premier toy manufacturer in America.

College dropouts Bill Gates and Paul Allen founded Microsoft in a garage in Albuquerque, NM. Their initial project was to develop and sell BASIC software interpreters for the Altair 8800 computer. Obviously their project worked out, because by the mid-1980s their MS-DOS operating system was dominating the personal computer market.

Steve Wozniak met Steve Jobs while both were working for Hewlett-Packard. Wozniak worked to assemble the circuit boards for a new computer he was developing – the Apple I – in Jobs’ garage. You could say that things sort of took off from there. Apple is now the most valuable technology company in the world.

Jeff Bezos initially founded Amazon.com as an online bookstore, which he completely ran out of his garage in Bellevue, WA. He sold his first book in 1995. Today, Amazon is the world’s largest online retailer.

Google started as a PhD research project for Larry Page and Sergey Brin while they were students at Stanford in 1996. They incorporated their search engine company two years later, and based their business out of the garage of a friend in Menlo Park, CA. Google rose to become the most trafficked site in the world.

Lots of amazing ideas have been incubated in garages, and garages themselves have come a long way, too. The days of old, rickety, drafty, leaky, wooden barn like structures are now a thing of the past! A modern metal garage constructed from light-gauge steel is truly a superior structure. These buildings aren’t susceptible to the same wear and tear of a pole garage or wooden structure. They also require less maintenance, and are much easier to clean. Since galvanized steel doesn’t rot, warp, or crack, you can just hose off or hose out your building with little worry about water exposure. A steel garage provides better protection from the threats of weather, pests, fire, mold, and mildew, too. On top of that, a steel garage is not complicated to expand or adapt if your needs grow or change in the future.

Start Innovating in Your Own Metal Garage from Carport Central!

Ready to protect your own vehicles, equipment, and possessions in the best outdoor structure you can get? Or maybe you’d like to start creating your some inventions of your own in a dedicated workshop space? Whatever you have in mind for your metal building, Carport Central can make it happen! We do more than just sell metal structures; We Provide Shelter for Your Way of Life!

Carport Central is the premier online metal structure provider in America, and we can deliver and install your custom steel building at no extra charge in 46 states! Our building specialists are really the best in the business, and nobody beats our level of personalized customer service. We offer the best buildings at the best prices, and we also give you options to help you afford the building you need through our preferred financing, rent-to-own, and layaway plans.

Exclusive info. in your inbox!
Learn more about precision-engineered metal buildings with a wealth of tips and insights that we only share with our private newsletter subscribers.

to get a price

QUESTIONS? Carport Charlie has the answers!