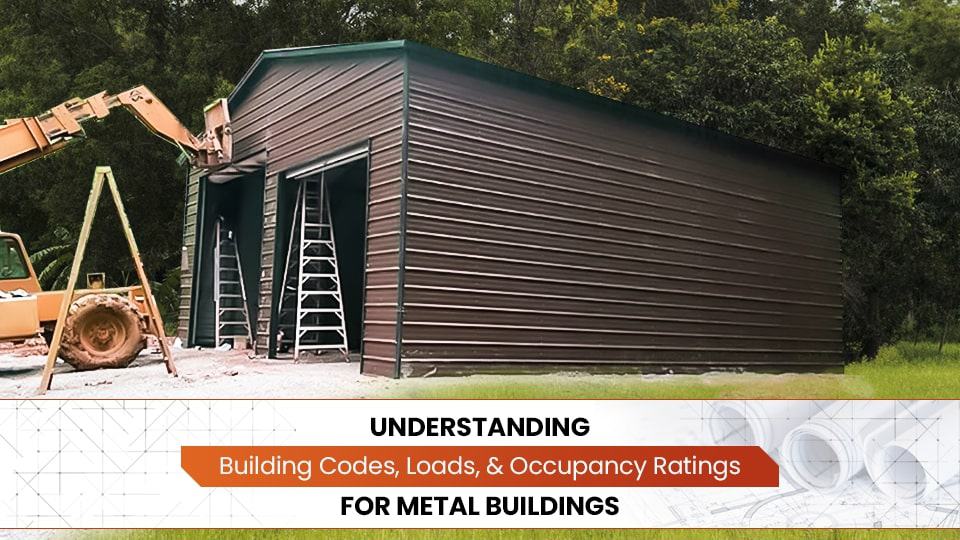 We talked in a previous blog about how codes and standards have been developed for cold-formed steel as a building material, but there are also some specific engineering and design guidelines that go along with the construction of a metal structure itself. In fact, these sorts of guidelines don’t just apply to metal buildings; all buildings must meet certain building codes, load requirements, and human occupancy ratings, depending on the standards set by each local municipality, county, and/or state. Since buildings are primarily intended to provide reliable shelter for people, possessions, and various applications, each building should be constructed to meet various minimum standards.

That’s quite a load!

In the case of metal buildings, two particular areas of focus for local building codes are loads and occupancy ratings. We’ll start by taking a look at loads. Loads speak to a building’s ability to protect against weights and forces exerted on the building itself (e.g. dead load, live load, collateral load, concentrated load), and upon the building’s ability to protect against specific forces of nature like wind load, snow load, and seismic load. Let’s take a closer look at some of these load categories:

WEIGHTS & FORCES EXERTED ON THE BUILDING

This is simply the total weight of the metal building’s permanent structure, including things like framing, roof, paneling, and insulation. Total dead weight is one factor that has to be taken into consideration when measuring a building’s structural integrity.

While dead load is a measure of permanent structural weight, live load refers to any temporary load placed on a building that isn’t related to weather or other forces of nature. Live load encompasses things like building occupants, furnishings, equipment, materials, and other examples of variable weights.

Collateral load takes into account the weight of other permanent materials that aren’t directly part of the metal building’s support structure. This could include things like sprinklers, ceilings, mechanical systems, electrical systems, or other loads which are distributed evenly across the building.

RESISTANCE TO SPECIFIC FORCES OF NATURE

Metal structures should be designed to withstand the forces imposed by wind blowing in from any direction. Many areas across the U.S. have a minimum wind load building code in place. Some regions have more stringent wind codes than others. For example, since Florida has to contend with hurricanes, tornadoes, and other wind events more frequently, the minimum required wind resistance is higher there than in many other states.

Snow load takes into account a metal building’s ability to support the vertical load added by the weight of accumulated snow on the roof, as well as the weight of any snow that may drift and accumulate against the side of the building. Obviously, average snowfall varies widely by geographic region, so this can also affect the minimum snow load requirements for a given location.

Some areas are more prone to seismic activity than others, but earthquakes of varying magnitudes can be a possibility in nearly any location. For this reason, many areas do have some minimum seismic load requirements. And one advantage of choosing a steel as a building material is that steel is both stronger and more flexible than wood. A steel structure is better engineered for withstanding earthquake waves than a traditional stick-build.

How many people will that thing hold?

Apart from weights, loads, and environmental forces, another common area of building code focus is human occupancy. An occupancy rating is assigned to a structure based upon the number of people it can safely accommodate. Generally speaking, the more people your building needs to house and protect, the stronger the building needs to be. Buildings typically fall into one of four occupancy categories:

These are buildings which aren’t intended for public gatherings. Some examples include agricultural structures for various applications like livestock housing, dairy production, horse arenas, and milk production facilities. General storage facilities and buildings designed to house various equipment fall into this category, as well.

Most buildings which aren’t specifically designed to accommodate large groups of people will fall into this category. For most permitting offices, Normal Human Occupancy is the default designation given to a building which doesn’t specifically fall under one of the other three categories.

These are buildings which are primarily designed for assembly or for accommodating large numbers of people on a regular basis. This includes things like schools, churches, auditoriums, stadiums, and community centers. Manufacturing or storage facilities containing items which are potentially hazardous, toxic, or explosive must also fall under this occupancy rating.

Buildings which are used to provide essential services in the event of a disaster must be constructed in a manner to earn this highest level of designation. Some examples include hospitals, emergency response facilities, power-generating facilities, water treatment facilities, and police & fire stations.

The International Building Code (IBC) further differentiates buildings into ten main occupancy categories, including Assembly, Business, Educational, Factory/Industrial, High Hazard, Institutional, Mercantile, Residential, Storage, and Utility & Miscellaneous. Some buildings include space that may be classified under more than one occupancy group. Multi-use application buildings of this nature are typically referred to as having mixed occupancy.

Carport Central can get you what you need in a reliable steel structure!

Perhaps you find yourself in need of a new building for a specific residential, commercial, agricultural, or industrial application. How do you intend to use your building? What local building codes apply in terms of various loads and occupancy ratings? The good news is that  Carport Central is here to provide you with a perfect steel building solution! Every metal structure we provide is custom built-to-order, and we can help you to take every necessary building regulation for your local area into account. Of course, we have a great selection` of metal carports, but that’s really just the tip of the iceberg in terms of what we have to offer. We provide a host of custom steel structure solutions for nearly any application. Whether you may need a garage, barn, utility building, workshop, retail storefront, warehouse, manufacturing facility, production facility, office, or residential space, we’ve got you covered! We even give you the freedom to design and create your own personalized building with our powerful, simple-to-use 3D Building Design Tool on any computer or smart device.

Ready to get the conversation started? You can reach out to us online, or just give us a call at (980) 321-9898 and speak to one of our friendly building experts. And remember, Carport Central is about much more than just selling you a building. We’re about Providing Shelter for Your Way of Life!